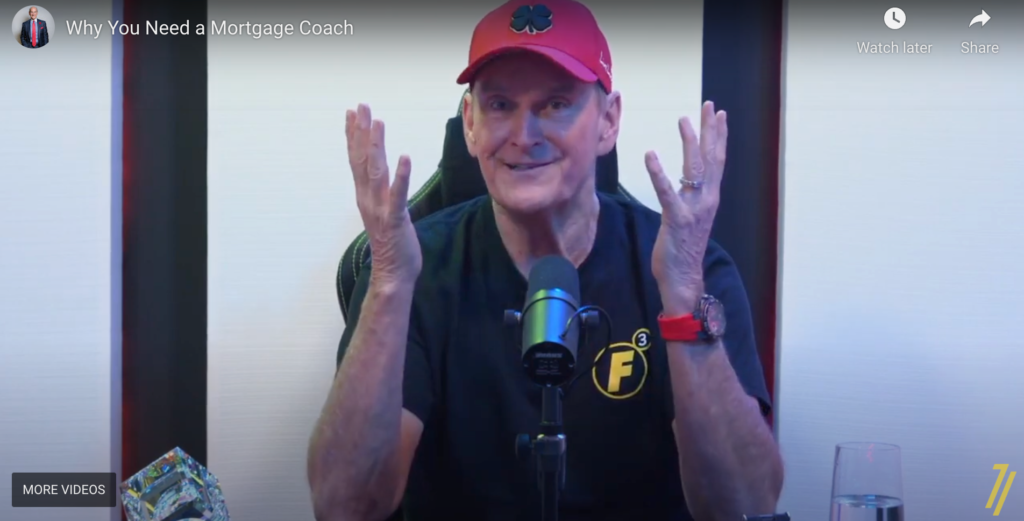 Why You Need a Mortgage Coach

People ask me all the time, why did you start a coaching company? And the answer’s actually really simple. In this video and blog post, I tell my story as a loan originator, and how coaching helped me so much that it ignited my passion to become a mortgage coach for others.

Watch this video to learn the number one rule for success:

My Journey as a Loan Originator

What I found out instead was a lot of tension. There was a lot of resistance. I didn’t have really good marketing ideas in my head. I didn’t really know how to differentiate and disrupt in my approaches. I had no real appreciation for the value of relationships versus just pursuing transactions.

And I remember a day, not too long after I began, probably within the first 90 days. I was really frustrated that I wasn’t getting a lot of business. I was getting rejected massively. I had real estate agents and business owners and banks and people that I was trying to originate mortgages through just shutting me down and shutting me out.

I’m an achiever. I like to win. I like to do well, and it didn’t feel right. So I called a friend of mine and I said, “Can I just come by your dad’s office?” He happened to be a real estate broker. And I asked, “Can I just watch what happens?” Because I was primarily calling on real estate agents to get my business, a few banks here and there. He said yes.

I remember going by, and I remember spending a couple hours there and just making the observation. I love what Benjamin Franklin says. “The eye of the master will do more than both of his hands.” Observation rules, right? And so I’m sitting here watching, just disassociated from being the loan originator, making the calls and everything, and just intrigued, right?

I had curiosity about how title reps and how mortgage professionals were actually making sales calls. And a couple hours into it, I was fairly convinced that we were all horrible at doing what I felt horrible at doing. Then, this guy walks through the front door and he’s got a beautiful suit on, he’s got a nice leather folio. And he comes in and he has an appointment with the number one real estate agent in that office.

That piqued my interest. And then, he disappeared for about 45 minutes. And upon returning to the front desk, he was with the realtor and they extended their hands to shake what became their partnership. And he looked at the agent and he said, “I look forward to a long and mutually profitable partnership.” I began to realize right there that partnerships were the name of the game.

Partnerships and Relationships are Key to Success

Not formal partnerships necessarily, but partnerships. “I got your back, you got my back. I’m going to help you win, you’re going to help me win.” And so, I called this guy a couple days later and I told him I watched what he did at the real estate office I was in. And I said, “Could I buy you lunch? And I just want to ask you some questions, I’m brand new.” And he agreed to do it.

And I think one of the beautiful things about being mentored is that someday you will also mentor others. And in our coaching program, it is about getting you to that stage where you have freedom and you’re able to begin mentoring people differently on your team. But in between then and now, you have to make decisions about; what did he do, how did he get that appointment, and why am I working so hard and getting rejected every single call?

He says, “No, it’s how much are you not making because you’re not paying, not how much is it?” Did you follow that? And so he said to me, “He said it’s $350, $400 a month.” And I’m going, “Are you kidding me?” Now mind you, I’m three months out of college, right? I got a $1,500 credit card. My dad taught me never to charge anything that I didn’t know I could pay for within 30 days. So, I was feeling a little bit nervous, and he looked at me and he said, “Listen, if you do this, and you let me meet with you on a regular basis and you hire this coach, within about three months, you’re going to be making 10 times that every month.”

And I said, “I’m going to be making $4,000 a month?” He goes, “Easy.” And I got to tell you something. I’m sitting here thinking, “Wow, I got to make this decision. I got to put $400 out there.” And when you have your own skin in the game, it’s unbelievable. And he said, “When you invest in yourself, you succeed faster and at a higher velocity. When you don’t invest in you, you’re part of the pack. You’re part of all the competition that’s out there.”

My Success Through Mortgage Coaching

And so, I made this decision. And my first year in the business, I funded $27 million in loans. And I only did that because I had a mortgage guy coaching me. So I started a coaching company primarily because I got impacted by having a guy coaching me in becoming the best mortgage professional I could be.

And the reason why is because everybody that performs at a peak level, doesn’t matter if they’re an athlete, a musician, an actor, an actress, a leader. It doesn’t matter what your stage is. What matters is that you’re getting coached by somebody who can guide you, be bold with you, give you answers to your questions, share solutions with you that work, and in the process of doing that, you gain confidence.

The reason you gain confidence is because you become more competent in the skills that actually build the business. And in our world, we work very clearly to help you maximize how much money you make per hour. Not because the money is our focus, I guess maybe it is. And the only reason it might be is because we don’t want people to give lifeblood and not get paid for it.

Why did I start My Coaching Company?

And I’m not being negative and I’m not trying to make anybody feel bad. I’m just telling you that it’s out there. The global universe of money is out there. And if you’re going to give life blood, if you’re going to give the heart and soul of your life to a business; you must run the business, you must own the day and the business must work for you, and you cannot become a byproduct of the business not working for you, which is where most people are. It’s highly dysfunctional.

So, we help you build better efficiency, better systems, better delegation, better targeting, better conversion, deeper relationships, longer relationships, more productive relationships. And we teach you how to build a referral network in our patented business system, called the circle of cash flow, that will simply blow your mind.

In 24 months, one of our coaching members has gone from a database of 2,500 people to a database of 19,000 people using our target marketing approach and working with business verticals in the area of wealth management. And it’s interesting because he’s having so much fun doing it. And that’s a question for you.

Are you having fun?

So What Are You Waiting For?

Go ahead and schedule a free coaching call. Let us spend some time with you on the phone, and let’s see if it makes sense for you. What I do know is that an investment of $1000 a month is going to return $10,000 a month if you follow the plan. And so, we know that every dollar in is about $7 to $10 out. It’s that straightforward. And we want to help you win.

Make more money in less time with less stress because you have a mortgage coach.