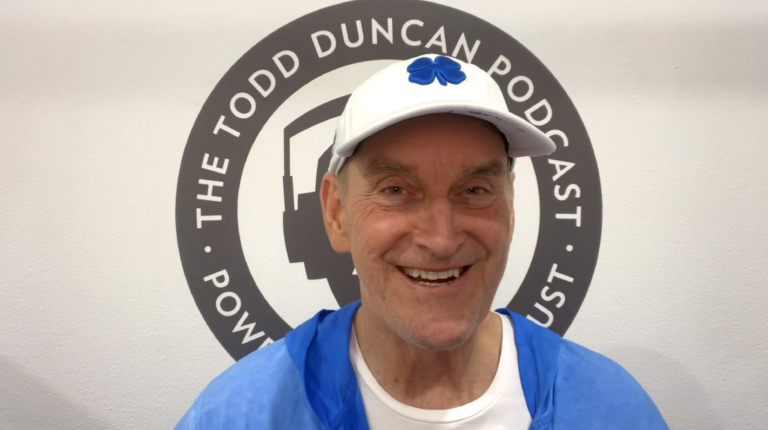 I want to talk to you about a cool concept. And I want to simultaneously lay down a challenge to try to make 2022 about this one idea. I want you to make sure your thank you gifts last forever.

In this video, I show you just how to accomplish that, and take you through some of the gifts that I’ve given and received that will last forever.

The Thank You Gift I Received That Sparked This Idea

I had an interview with a guy by the name of Harvey Mackay. He owns the Mackay Mitchell envelope corporation, and he also is a best selling author. The first book I read that he wrote was called How to Swim With the Sharks Without Being Eaten Alive. That’s a great title. Right? Most recently he had a book out called Mackay’s NBA on and selling in the new world. And so I wanted to do an interview with him.

It was on a Thursday afternoon and Friday morning. I remember hearing the FedEx truck come by and I went out, opened my door and there was an overnight package on my front porch. I opened it and I pulled out a very beautiful silk envelope that had a bunch of sharks on it. It was that theme, you know, how to swim with the sharks about being eaten alive. And when I opened the envelope and I pulled out the contents, there was a five page letter on which Harvey Mackay had used the words. Thank you. 625 times. And at the very end of the letter, he personalized it a little bit. And it was really a remarkable experience for me because I looked at that letter and I immediately made a decision that I am gonna keep this forever. Not only was it creative, but it was over the top, you know, beautiful. 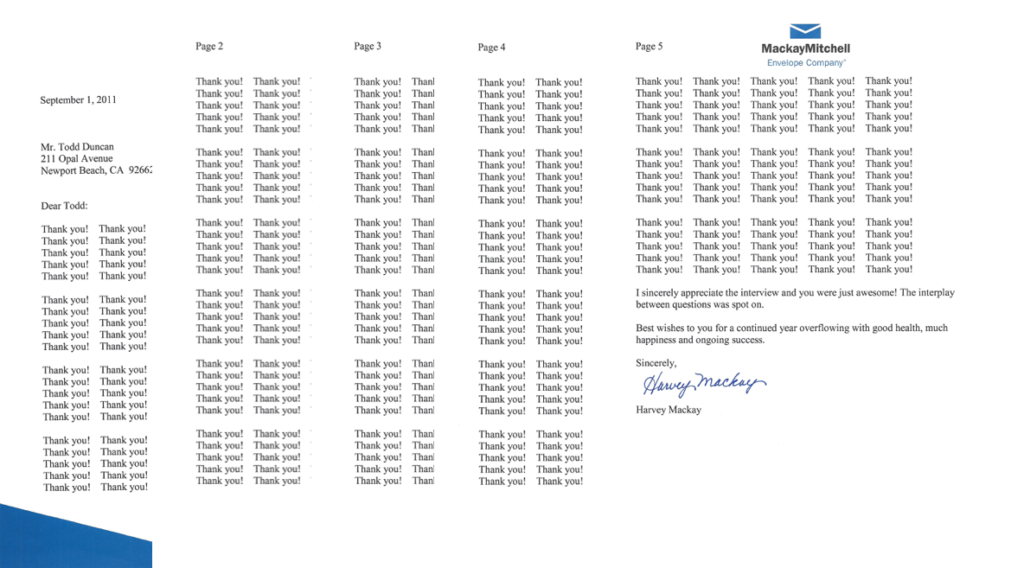 It really resonated with me. In the mortgage and real estate world, when we talk to salespeople, most often the gifts that we give to say thanks, they’re well intended, but when they get consumed, whatever they might be, then they’re gone. And so the idea was born.

Then Deb and I wrote a book called The $6,000 Egg, and we took 10 massively powerful service stories. And we wrote about each of those stories to make your thank you gift last forever. Last forever became the 10th chapter of The $6,000 Egg. And so when the book was published, I wanted to send a case of those books to Harvey Mackay, and I wanted to personalize my thank you note to him.

So I sent the case of books out and about a week later, I got a text from my assistant. She said, Harvey Mackay wants to talk to you tomorrow at one o’clock. This was also a Thursday. He wanted to talk on Friday. And so when I called him, he said, I love the book. Thank you so much for including our story, my story on that letter that I sent to you, thank you for including that in the book. And who, who came up with the book title? I said, my wife actually, and he said, I figured that, but here’s why I wanted to talk to you today. I was so impressed with what you did. I wanted you to know that tomorrow morning on Saturday, I’ve written a 900 word summary on your book, and it’s gonna be in the top a hundred newspapers in America tomorrow morning in the business section.

And it’s one of the ways that I can say thank you to you. So the whole thing starts off with an interview, a five page thank you note, me telling his story, me sending him the books, him thanking me for the books by putting the book summary in the newspaper.

And you know, the next morning my mom called at 6:15 in the morning. She said, Todd, you’re in the Orange County register. And you know, it was all just that story. And I still have this letter today, even though it’s been almost 10 years since I did that interview. So here’s some examples of how you do this, right? And, and the, the, the kind of the philosophy behind giving a thank you gift that lasts forever.

Giving a Thank You Gift That Lasts Forever

If you have multiple purchases that are multiple deals with the same person, you don’t have to do it on every deal, but you should give, you know, at least one massively powerful, thank you gift that’s gonna last forever.

I’ll give you some examples.

I was on a podcast about five months ago and it is a really powerful podcast with Steve Kyles. And after the podcast, I was so grateful for our time together that I set him an 18 inch tall hourglass. 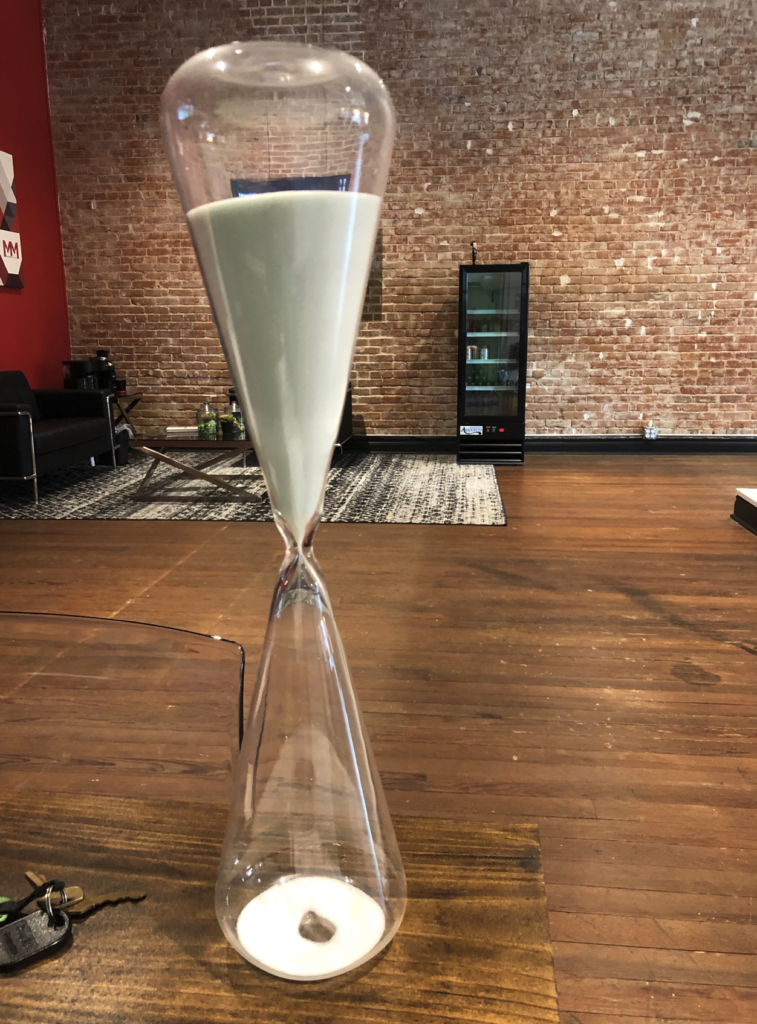 Now every time he sees the hourglass, he thinks of me. And that’s kind of the idea behind this. It’s subtle. It’s not in your face. It doesn’t have a plaque on it that, you know, to you from me, it is just a physical representation of a moment in time.

And so I was talking with a CEO a couple of years ago, and one of the things that is really big on in high trust is active listening. Active listening simply means that you’re listening for an action. And so I got to kind of have a conversation with her. And I remember during the conversation, she said, I wish I had a crystal ball. And I heard that, we kept talking and everything. And, but as soon as the call was over, I had my I team go online and we found a beautiful crystal ball with a Sterling silver stand. 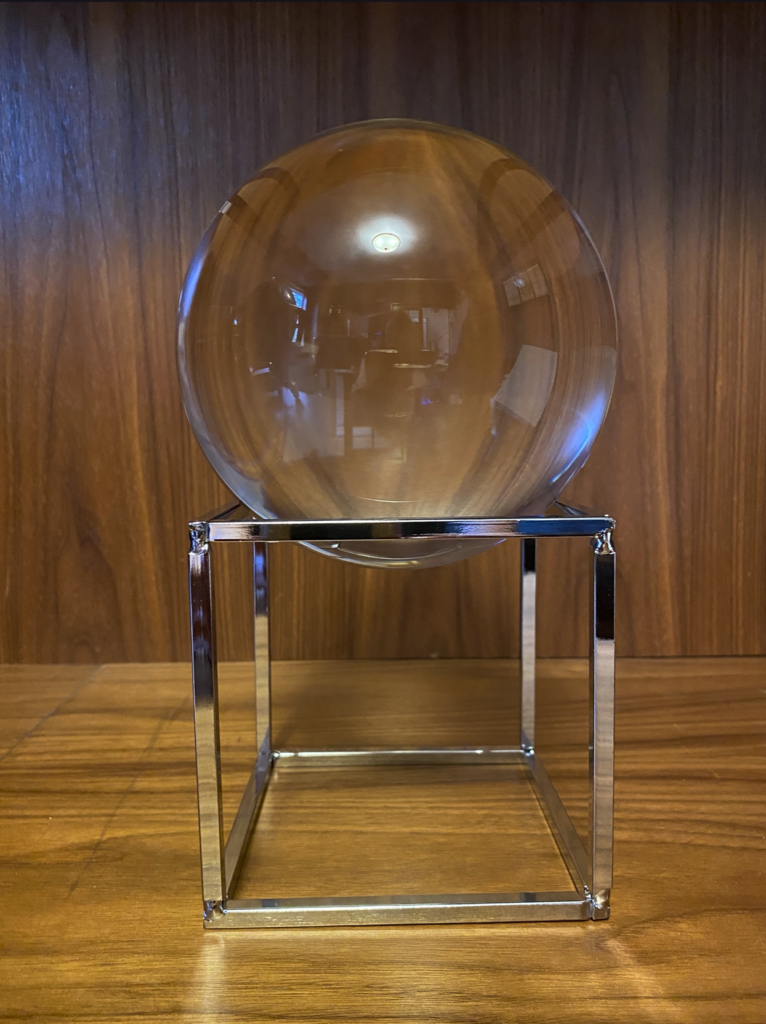 I sent that to her as a thank you gift for our relationship in business. And it is on her desk today, every day, she looks at the crystal ball and she thinks of me.

I was having a conversation recently with one of our global accounts. I had my Raiders hat on, and one of the gals that I was talking to said, so you’re a Raiders fan. And I said, yes. And I asked her, are you a football fan? She said, yes, I absolutely love the 49ers. So note to self, right?

When the call’s over, let’s go ahead and go to the nfl.com store. And let’s figure out a couple things that are 49 or gear for a woman and, and send that out to her. So every time she puts on her 49ers hat or a Jersey or whatever, you know, she thinks of us. And so the idea behind this is to really, really listen, but the idea is also to do something that’s really remarkably special.

We have an event called masterclass and I was hosting a masterclass a couple years ago, and there was a guy in the room. His name was Michael Harrington. He’s a pilot, I’m a pilot. And during one of the breaks, we were talking about planes and kind of my goals on what plane I wanted to buy and this, that, and the other thing. And it was just a, you know, just an easy kind conversation I had. I had no expectations outside of the fact that we connected his pilots. And about three weeks later, I got a FedEx envelope from him. And inside was this beautiful watercolor that one of his borrowers’ daughters, 13 years old, who was studying art and watercolors actually did this beautiful water watercolor painting of the plane that I was talking about buying and the runway at the airport that is my home airport in Orange County, California. 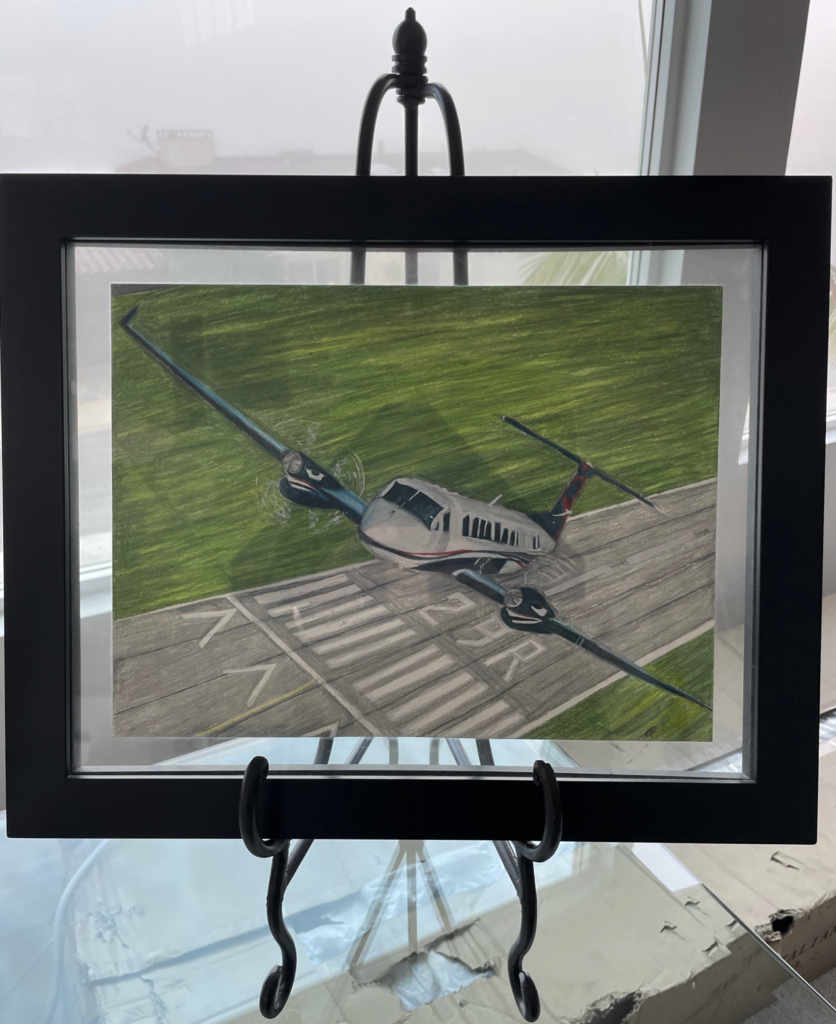 It’s on one of my desks in one of my homes. And every time I’m at that desk, I’m looking at this beautiful watercolor and I’m thinking of Michael Harrington.

And so I’m giving you permission to unleash your creativity around this.

We got the notion early on, Deb and I, that one of the big celebratory points for any one of our clients is when they have a child. And so one of the things that Deb said is maybe a, what we ought to do is kind of give a gift that is gonna last a long time for the child, not even just the parents, but a long time for the child. And so we were doing some, some creative thinking and we came up with let’s buy piggy banks from Tiffany. A beautiful Tiffany piggy bank is about $135. 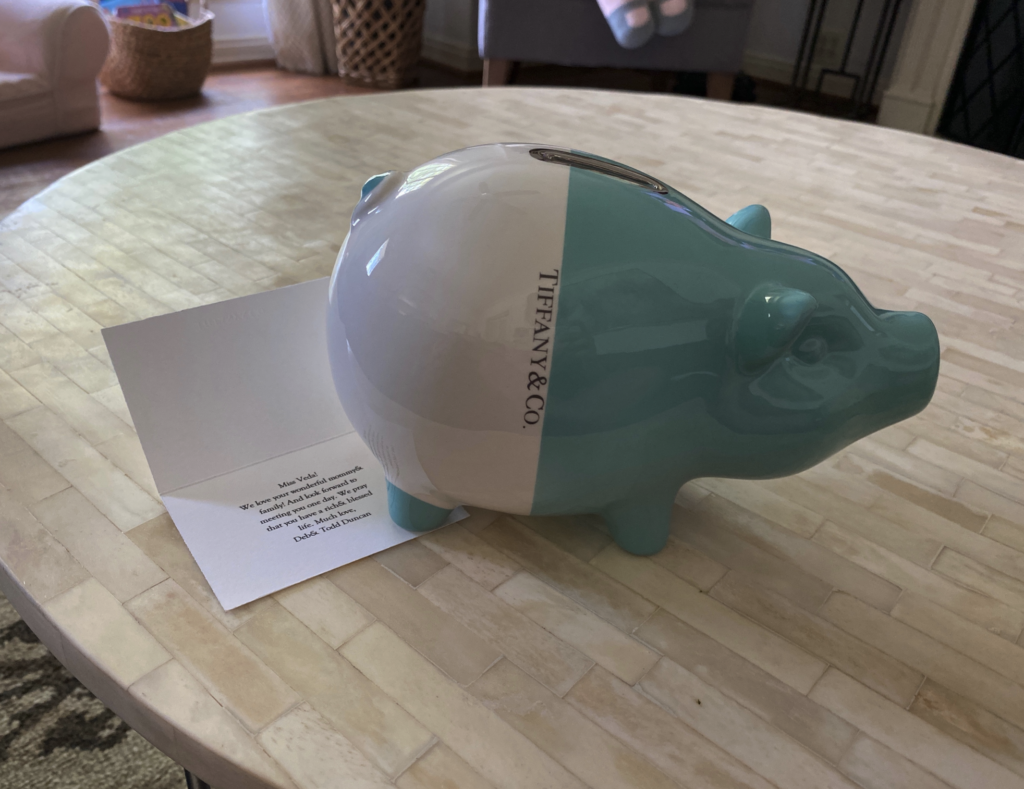 So we actually buy that, have it sent with a note to the child. And in almost every case, we get a picture back after the piggy bank has arrived. And, you know, the little girl or the little boy putting money in their piggy bank and coming up with that early life discipline about fiscal literacy and things like that. 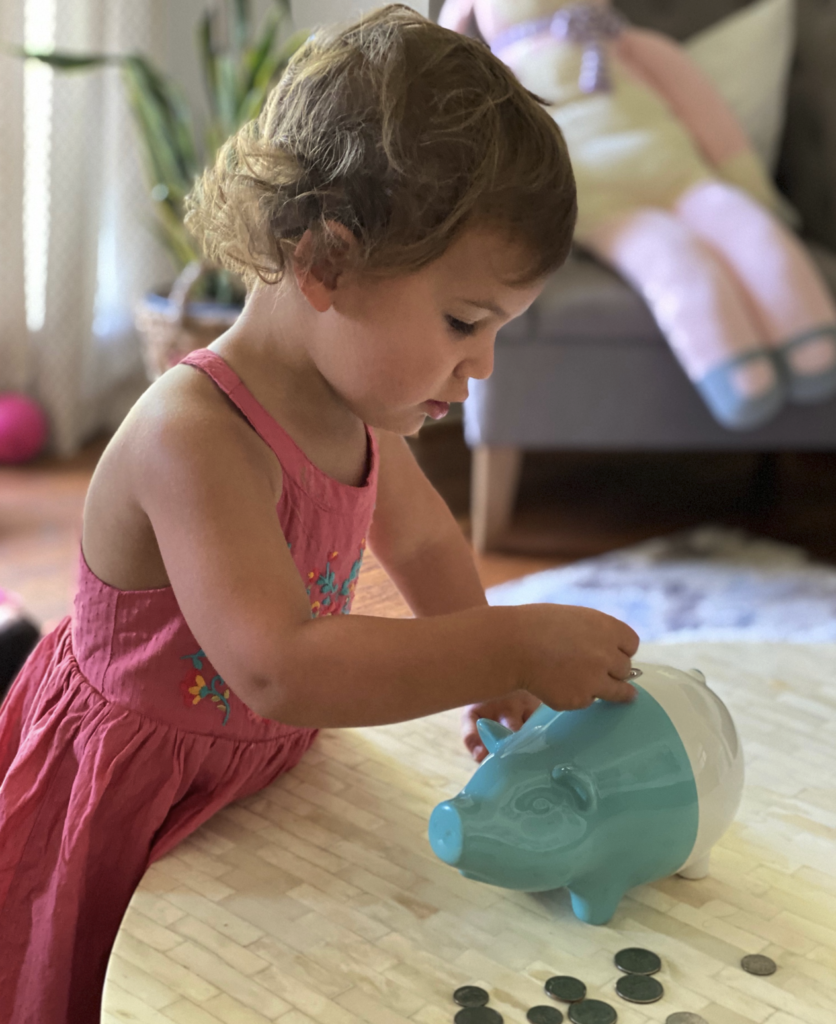 These examples continue to kind of flow forth.

I had an idea just last year. We were having a conversation with a bunch of clients in our Elite group. And we got on the topic of self defense.I had this idea, let me just ask each of these individuals, what is their favorite word and what is their favorite motivational quote or spiritual, you know, scripture or anything like that?

And what I then did is I went to a friend of mine who owns a company called desk jewelry. And I said, I would like to make custom knives for my clients. And so there’s about 28 people in this group. And so he made these beautiful knives, black for the men and pink for the women, with a word on one side of the blade. And then the phrase on the other side of the blade, and then the person’s name on the, the pocket clip. 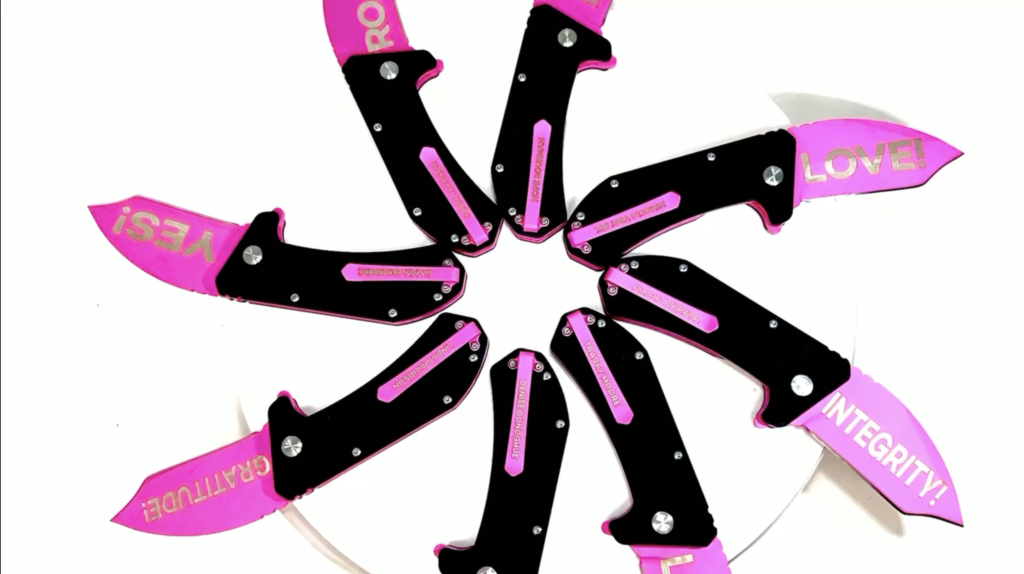 What Gifts Can You Give That Will Last Forever?

So, you know, in these 10 minutes it is just about what kind of gifts you can give. What can you do to make them last forever? How can you actively listen to acknowledge this? And, and what we know, we know absolutely for certain, that marketing is what other people are saying about you.

And so when you do something like this, that is remarkable, the way that the client communicates to others is really a more in depth kind of relationship kind of than it would be anything else, but I’ll tell you, they last forever, and if you make your thank you gifts last forever, then your clients are gonna remember that forever. And it’s a good thing.

4 STEPS TO DISCOVERING A BETTER WAY OF DOING BUSINESS

Your free coaching consultation is a simple, friendly conversation with one of our expert business consultants.  Here’s what you can expect:

book at your own convenience: please call (855) COACH HT

My newest digital and mobile six-week immersive course teaches you a proven method to CONNECT! at every level of the human experience. You will reignite your passion, creativity, and value and have healthier, happier and more productive relationships in business and in life.